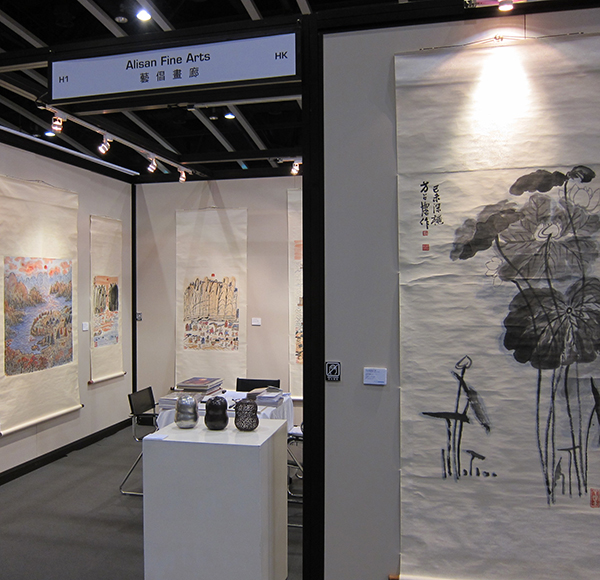 Fang Zhaoling
Introduction
Internationally known artist Fang Zhaoling (1914-2006) is one of Hong Kong’s most famous painters. Since her passing away in 2006, this is her first solo exhibition in Hong Kong where her works will be for sale. Around 25 pieces of paintings and calligraphies dated 1978-1998 will be on display.

Born to a scholarly family in the city of Wuxi, Jiangsu Province, China, she had a strong interest in Chinese calligraphy since her childhood. She studied bird-and-flower painting under Chen Jiucun (1898-1957) and landscape painting under Qian Songyan (1899-1985) at Wuxi Art College. When she was 19, she participated in the “White Wave Art Society” exhibition in Wuxi. Her talent and knowledge of Chinese ink art was evident even at a young age. By 1950, in Hong Kong, she was a student of Zhao Shao’ang (1905-1998), a leading proponent of the second generation of the Lingnan School. Under his guidance, she produced primarily bird-and-flower paintings. By 1953, she had become a student of the renowned artist Zhang Daqian (1899-1983), viewed by many as the greatest 20th century Chinese ink painter. During the 1960s, she studied paintings by Wu Changshuo (1844-1927) and Qi Baishi (1863-1957) in great detail, learning to use their free style method of cursive calligraphy to create paintings. She learnt from many teachers and tried to identify their merits. In addition, to extend her aspirations, she travelled to majestic landscapes in mainland China. Following Zhang Daqian’s guidance, she sought out raw beauty and the vitality of nature throughout her lifetime. Her composition is firm and solid; her technique is skillful; her paintings are full of great vigor. It is amazing that these images are done by a petite woman artist.

Fang Zhaoling’s experience of wartime and many difficult life circumstances helped her reach a pinnacle in art and the creation of her own style. In 1937 when she was studying Modern European History at University of Manchester, UK, she met Fang Xingao, eldest son of General Fang Shuping, and they married in 1938. At the outbreak of the Second World War, the couple faced instability and lack of finances. The period from 1939 to 1947 was extremely disruptive. In 1939, they left the UK for New York, USA via Norway. Later, they went to Shanghai before returning to Hong Kong. In 1941, when the Japanese occupied Hong Kong, the family (then with six children) successively took refuge in Guilin, Guiyang, Chongqing, Tianjin and Shanghai. Upheavals and hardships during this period made it impossible for Fang Zhaoling to paint for some ten years. In 1950, they returned to Hong Kong where her husband died suddenly, leaving eight very young children. She took over her husband’s export/import business and brought up the children by herself. (Her eight children are successful in their careers. Most prominent is the eldest daughter Anson Chan, who, before 1997, was Hong Kong’s highest ranking government official of Chinese heritage and, who, after the handover, became the Chief Secretary for Administration of the 1st HKSAR Government.)

No matter how difficult life was, Fang Zhaoling never gave up painting. She expressed the pain of national tragedy and loss of her husband, and the love of her homeland, teachers, friends and children through her paintings.

Since 1951, Fang Zhaoling participated in exhibitions around the world every year, totaling more than 50 exhibitions in her lifetime. She became famous internationally and received worldwide recognition for her works. Her paintings are in the collections of famous museums such as the Asian Art Museum of San Francisco, USA; British Museum, London, UK; Shanghai Art Museum, China; Hong Kong Museum of Art, Fung Ping Shan Museum University of Hong Kong, Hong Kong. There are also numerous catalogues of her works. In 1988, she was awarded the Grand Prize “Zhongshan Cup” of the “International Chinese Ink Exhibition in Beijing”. In 1992, she was named the Painter of the Year 1991 by the Hong Kong Artists Guild. In 1994 she received the Honorary Degree in Literature from the University of Hong Kong, in 1997 an Honorary Professorship at Shanghai Jiaotung University and in 1998 received an Honorary Doctorate Degree from Soka University, Tokyo, Japan. In 2000, she was awarded the highest honor by Tokyo Fuji Art Museum, Japan and in 2003, was awarded the Bronze Bauhinia Star by the HKSAR government.

Alisan Fine Arts has been promoting her works since 1999, but her relationship with Alice King, gallery director, goes further back. The artist was a friend of King’s father, the shipping magnate CY Tung (1912-1982). In an interview in 2000, Fang discussed her friendship with him. In it she recalls: “During the 1970s in England, I met Mr Tung 5 to 6 times on different occasions. When I was in Hong Kong and London, Mr Tung often sent me tickets to concerts and exhibitions…..” (The World of CY Tung edited by Alice King & Prof Zheng Hui Xin [Hong Kong: Chinese University Press, 2004, page 432]).