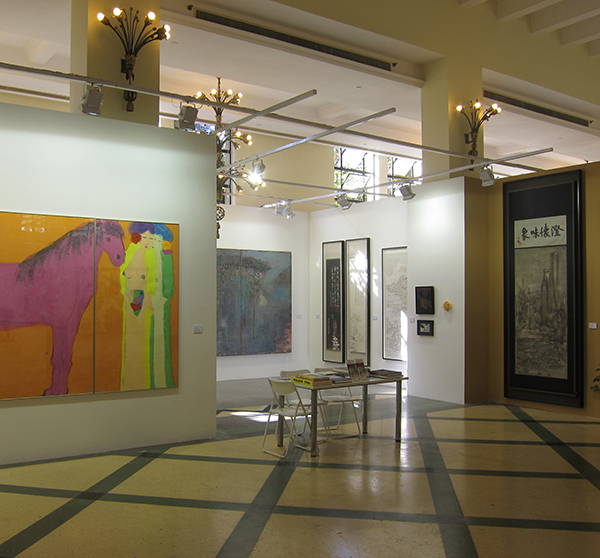 The gallery is very excited to be participating in Art 021 for the first time. For this special occasion we have chosen to showcase important works from prominent Chinese diaspora artists, Leng Hong, Walasse Ting, Xu Jianguo and Yang Jiechang as well as internationally acclaimed Shanghai ink artist Wang Tiande. Besides Yang Jiechang, the other four artists have been selected for their connection and heritage to Shanghai. Although some of them may not live there anymore, Shanghai was where their artistic career began. Never before exhibited works by Walasse Ting will be on display as well as new works by Wang Tiande and Xu Jianguo.

Leng Hong, born in 1955 in Shanghai, is a celebrated Chinese-French artist acclaimed for his exquisitely textured oil paintings, imbued with rich colours, and ‘mysterious’ feelings. He is also an adjunct professor in the department of Fine Arts at the Shanghai University. His oeuvre varies in subject matter, from landscape and still life scenes to portraits of ladies in waiting from the Tang and Song Dynasties. Blending western medium and technique with Eastern subject matters, his works are a live mix of East and West. He graduated from the Shanghai Institute of Theatre and Dramatic Arts in 1978. During the study at the institute he learned to paint in the traditional European style and became adept in perspective, chiaroscuro, modelling, and social realism. He also studied traditional Chinese brush and ink painting, and was particularly drawn to Tang and Northern Song landscape paintings. After moving to Bordeaux, France in 1986, he began experimenting with different styles, seeking ways to draw aesthetic inspiration from both traditions. He currently resides in Montreal, Canada, and is an adjunct professor in the Department of Fine Arts at Shanghai University.

Walasse Ting, born in Wuxi, Jiangsu in 1928, who nicknamed himself “The Flower Thief”, is a Chinese-American artist celebrated for his colourful and bright depictions of animals, flora and sultry women in the 20th century. He briefly studied at the Shanghai Art Academy in 1940s, before leaving for Paris in 1948 at the age of nineteen. There he became associated with artists belonging to the avant-garde group CoBrA. In 1958, he travelled to New York, where he befriended the American artist Sam Francis and strongly influenced by Abstract Expressionism and Pop Art. In 1964 he wrote One Cent Life, edited by Sam Francis and published by E.W. Kornfeld, which involved collaborating with twenty-eight European and American Pop Art and Abstract Expressionist artists such as Andy Warhol, Roy Lichtenstein and Joan Mitchell, and included sixty-two original lithographs. In 1977, he won the Guggenheim Fellowship Award for his drawings. His paintings during this period are filled with bold dripping brushstrokes mixed with bright acrylic pigments, but by the 1970s, he began experimenting with figures, developing the distinctive style that we are so familiar with today. He passed away in 2010 in New York. He was first solo exhibited at Shanghai in 1997 and then participated in Shanghai Ink Biennial at Zhu Qizhan Art Museum in 2007. Musée Cernuschi has held the first large-scale retrospective show of Ting in France earlier this year. This time, we carefully selected the most iconic Ting’s works for ART021, including his most renowned triptych Two Oriental Beauties with a Purple Horse, rare large-scale paintings Three Ladies in Purple Holding Fans and Ten Colourful Parrots from his early years. Those paintings represent Ting’s sheer testimony to love, life and beauty.

Wang Tiande, born in Shanghai in 1960, is an innovative avant-garde ink artist. He studied at the College of Art in Shanghai in 1981, before pursuing further studies at the China Academy of Art in Hangzhou. After graduated in 1988 with a degree in traditional Chinese painting, he went on to obtain a PhD in calligraphy in 2014 from the same academy. He is now dean and professor at the Art and Design Department at Fudan University in Shanghai and well versed in traditional Chinese art and culture. His most groundbreaking creation, Chinese ink with burn marks on layered rice paper and the use of incense sticks in lieu of brushes to paint, transforms paintings of traditional landscapes and calligraphy, while conveying the ephemeral quality of painting. He first gained international recognition when his work, Ink Banquet, produced in 1996, was exhibited from 1998 to 2000 as part of Inside Out: New Chinese Art, a travelling exhibition curated by Gao Minglu. Wang has participated in two group exhibitions at the Metropolitan Museum of Art in New York, as part of Brush and Ink: The Chinese Art of Writing in 2006, and the seminal exhibition Ink Art: Past as Present in Contemporary China in 2014. Major solo exhibitions have been held at Suzhou Art Museum, Today Art Museum in and The Palace Museum in Beijing in recent years. In ART021, we will be exhibiting his latest works that were just finished exhibiting in Guangdong Museum of Art in October.

Xu Jianguo, a world-renowned Chinese-American ink artist in New York, was born in 1951 in Shanghai. He obtained a Bachelor of Arts from the Shanghai Academy of Theater in 1976, and a M.F.A from Bard College, New York, in 1987. He attempts to transform the traditional Chinese landscape painting into cityscape. His famous cityscape silk paintings mostly depict the views of metropolitans, render a perspective effect through bird’s eye view and simultaneously offers magnificent atmosphere of landscape painting from Song Dynasty, which are perfectly displaying the artistic characteristics of both ancient and contemporary and both East and West. This time, we are bringing four ink on silk works depicting cityscapes of Paris, London and Shanghai to ART021, while the Shanghai cityscapes are specially painted for this occasion. Xu used traditional Chinese values to examine today’s capitalist world when he was painting, and thus hopes to evoke audience to treasure Chinese traditions. His works have been exhibited in the Brooklyn Museum, Smith College, Boston Museum College, and other institutions across the United States. Since 2010, Xu’s works have been featured in a solo exhibition that travelled around China, as part of US Missions sponsored cultural exchange.

Yang Jiechang, born in 1956 in Foshan, Guangdong, is a Chinese-French artist. He is considered as one of the most outstanding and discussed contemporary artist since Cultural Revolution in China. During the 1970s and 1980s, he has received traditional calligraphy and painting training. In 1989, he was chosen to participate in Magiciens de la Terre, at the Centre Georges Pompidou, Paris, and his series “Hundred Layers of Ink” caused quite a stir at the exhibition and in the international art scene. Mixed media can be found in Yang’s works, such as painting, calligraphy, installation, performance and video recording. For instance, his newly executed installation series “This is still Flower Painting” in this edition of ART021, consists of porcelain and painting. Yang first imitated Adolf Hitler’s oil and watercolour paintings from his youth by employing Western medium and applying the meticulous painting techniques of Emperor Huizong of the Song Dynasty. Subsequently enlisted the help of craftsman at porcelain factory to produce porcelain flowers by emulating various flower paintings. Yang breaks the border of time and space and brings two different historical characters together by adopting traditional Chinese emulating skills, which creates a surprising and unexpected chemistry. “When I began to study painting, I had to copy works by Huang Quan of the Five Dynasties and by Zhao Ji of the Song Dynasty for a long time. Now sixty years old and accustomed to the East and the West, the sweet taste of this first nourishment is still unforgettable. I have no words for it. For this exhibition I still paint bird and flower paintings. Our times resemble so much the times of Song Emperor Huizong. Art is some kind of medicine, revitalizing and clearing the mind,” Yang said in his solo exhibition at our gallery earlier this year.
He has participated in the Shanghai Biennale, Guangzhou Triennale, Shenzhen Ink Biennial, Venice Biennale, Lyon Biennale, Liverpool Biennale and Gwangju Biennale. His paintings were included in Ink Art: Past as Present in Contemporary China held at the Metropolitan Museum of Art in New York in 2014.