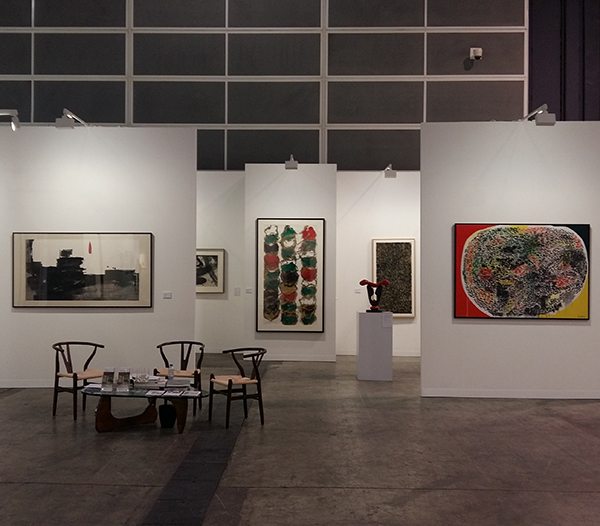 About the Artists
Like Zao Wou-Ki, Chu Teh-chun and Wu Guanzhong, Chao Chung-hsiang studied under the renowned artist Lin Fengmian at the Hangzhou National College of Art before graduating in 1939. In 1948, he emigrated to Taiwan, and in 1956 won a fellowship to study in Madrid. He toured Paris and Europe before settling in New York in 1958 and beginning a new chapter of his artistic life. He devoted himself to studying the works of the American Abstract Expressionist School and with this inspiration sought to integrate the philosophical ideas of Eastern culture with the vitality of the West. Chao has since then created numerous abstract pieces influenced by elements of Abstract Expressionism, applying colorful, vibrant acrylic swatches to the paper and overlaying it with streamlined, ink-rich painting, thus combining Eastern and Western styles. After more than thirty years in New York City, Chao moved to Hong Kong in 1989, then to Chengdu, and finally to Taiwan. He passed away in 1991. This year at Art Basel, we will be exhibiting his earlier powerful monochromatic ink splashes on rice paper, reminiscent of the American Abstract Expressionist movement.

A co-founder of the Fifth Moon Group, Chuang Che was born in Beijing in 1934 and studied classical Chinese painting and calligraphy since childhood. His father Chuang Shangyan was formerly the deputy director of the National Palace Museum in Beijing. Therefore, Chuang Che often had the opportunity to view the collections. In 1949, he emigrated to Taiwan with his family and graduated with a Fine Arts degree from Taiwan Normal University in 1957 having studied drawing under Chu Teh-chun. It was during this period that Chuang Che co-founded the Fifth Moon Group to promote Chinese artists' attempts to integrate traditional Chinese art with Western avant-garde art – in particular Abstract Expressionism. In the 1960s, he was awarded a fellowship from the Asian Cultural Council to study in the United States and traveled to Europe and the United States. In 1973 he settled in Ann Arbor, Michigan and in 1988 moved to New York, where he continues to work. Since the 1960s, he has made a concerted attempt to revolutionize Chinese landscape painting, incorporating abstract elements in acrylic and oil. The works we are showing are from late 1970s, when he was just settled in United States, and from 2001.

A founding member of the “Stars Movement,” Huang Rui was born in 1952 in Beijing and is a well-known Chinese avant-garde artist. This group of artists, numbering at least twenty and including such figures as Ai Weiwei and Wang Keping, was one of the first publicly active art groups to protest government censorship following the end of the Cultural Revolution. Prior to his involvement with the “Stars” group, Huang Rui was sent at the age of sixteen to work as a farmer in Inner Mongolia, from whence he returned to Beijing in 1975. The “Stars” group held one of China’s earliest modern art exhibitions in 1979 at the China Arts Gallery (now the National Museum of China) in Beijing, which on the third day was shut down by the police. In 1984, a year after the group dissolved, Huang moved to Japan where he remained until 2000 before returning to China. Here on display is a large monochromatic diptych created during Huang Rui’s time in Japan.

Born in Guangzhou in 1919, Lui Shou-kwan is hailed as Hong Kong’s pioneer in the New Ink Movement and has had a profound influence on the development of Chinese contemporary art. Lu’s father Lu Canming (1892-1963), a scholar-painter and antiques dealer, influenced his son to paint as a child. Lui practiced technique by copying the classical works of ancient masters, including Bada Shanren (1626-1705, Ming Dynasty), Shitao (1642-1707, Qing Dynasty), and later studied briefly under Huang Binhong (1865-1955). After settling in Hong Kong in 1948, he began experimenting with abstraction that ultimately lead to the creation of his unique Zen Paintings, three on exhibit here at Basel. Lui Shou-kwan passed away in 1975.


Born in Shanghai in 1955, Shen Fan graduated from the Fine Arts Department of the Shanghai Institute of Technology in 1986. In the 1980’s he began exploring abstract art, deconstructing forms and space in his paintings. He is one of the forerunners of incorporating classical Chinese elements into a contemporary context. In the 1990s, while creating works that combined monochromatic patterns and Western minimalism, he maintained distinct characteristics of classical Chinese art by painting on rice paper and applying numerous calligraphy-like black strokes to his surfaces. Since 1998, he has integrated Chinese artistic elements into his paintings, using various mediums and materials to explore the possibilities of new media. He created a groundbreaking installation in tribute to Huang Binhong for the 2006 Shanghai Bienniale, which reexamined the brushstrokes and composition of classical Chinese paintings. We are displaying Shen Fan’s early abstract creations from the 1990s.

Tai Xiangzhou was born in Ningxia Province to a scholarly family in 1968 and started studying calligraphy with Hu Gongshi when he was seven years old. He graduated from the Department of Digital Media, Media Design School, Auckland, New Zealand in 2001. Although he was highly successful as a media designer and conservationist, he decided to further his studies in painting and received a Ph.D. from the Department of Painting, Academy of Arts & Design, Tsinghua University, Beijing, China in 2012. We will be exhibiting his recent abstract landscapes layered with gray tones of varying depth on silk, creating misty atmospheres reflecting the vast universe.


Born in Wuxi, Jiangsu in 1928, Walasse Ting is celebrated for depicting flowers and attractive beauty with vibrant colors. He briefly studied at the Shanghai Art Academy in the 1940s before leaving for Paris at the age of nineteen. There, he became associated with artists belonging to the avant-garde group CoBrA. In 1958, he travelled to New York, where he befriended the American artist Sam Francis and became strongly influenced by Abstract Expressionism and Pop Art. His paintings during this period are filled with bold dripping brushstrokes mixed with bright acrylic pigments. By the 1970s, he began experimenting with figures, developing the distinctive style that we are so familiar with today. His paintings are a sheer testimony to love, life and beauty. His paintings of women, flowers, cats, fish, horses and watermelons are painted in a rich palette of bright acrylics on rice paper, layered with powerful effervescent brushstrokes in Chinese ink. He passed away in 2010. We are showing a painting in his signature style from 1990s. Although this work is figurative, influences of abstraction are clearly present in his treatment of the flowers and greenery.

A leader in the modern calligraphic movement, Wei Ligang was born in 1964 in Datong and currently lives in Beijing. Known as a maverick among China’s contemporary abstract calligraphers, his works simultaneously recall ancient calligraphy while innovating standard ink practices to form a trademark style. By combining Chinese ink on a gold metallic background, he has bridged the classical with the contemporary. In 2005, he was awarded a fellowship grant from the Rockefeller Foundation’s Asian Cultural Council to study in the United States, where he visited numerous museums and worked with other professionals in the field, including the well-known American Abstract artist Brice Marden. We will be showing Wei Ligang’s new work created especially for Art Basel.

A forerunner in the modern abstract sculpture movement in China, Wu Shaoxiang was born in Jiangxi in 1957 and graduated from Jingdezhen Ceramic Institute in 1982. In 1986, he obtained an MA of Sculpture from Central Academy of Arts and Design in Beijing and was awarded the first Beijing Art and Design Scholarship. His earlier works were influenced by both Western and Chinese elements. This made him an artistic pioneer at the time and set him apart from his more conservative counterparts in China. He emigrated to Austria in 1989, where he continued to blend East and West in his works while attempting to convey social messages by examining consumerism and globalization. With his talent for integrating form and concept, he earned recognition and acclaim on the international art stage and has held numerous exhibitions in China, Taiwan, Indonesia, Austria, Germany, Switzerland, Sweden and Hong Kong. His work Apple was recognized by the Guiness Book of World Records as the first and biggest coin sculpture in the world. On this occasion, we will be displaying his important early abstract sculptures from the mid-1980s, which were created before his move to the West.

One of the most important painters of Chinese Political Pop Art, You Youhan is also a representative of the Shanghai Minimalist Movement. Born in Shanghai in 1943, he graduated from the Central Institute of Technology in Beijing in 1970. Presently he teaches at the Shanghai Institute of Industrial Arts. His influence on Chinese avant-garde art has been felt since the mid-80s. Later he started to paint abstract works. Among them is his famous Circles series he began 1983, in which he adopted the circle as the best form to articulate his concept. The circle is an abstract symbol for the idea of "grasping things as a whole.” He tries to draw the relationship between dots and lines to illustrate the flow and changes between all things in the universe. The Taoist abstraction of dots and lines draw upon the roots of Chinese culture. He uses a colorful folk art pattern that blends his whimsical compositional approach and unique style. This work on exhibition is a masterpiece of You Youhan’s circle series.