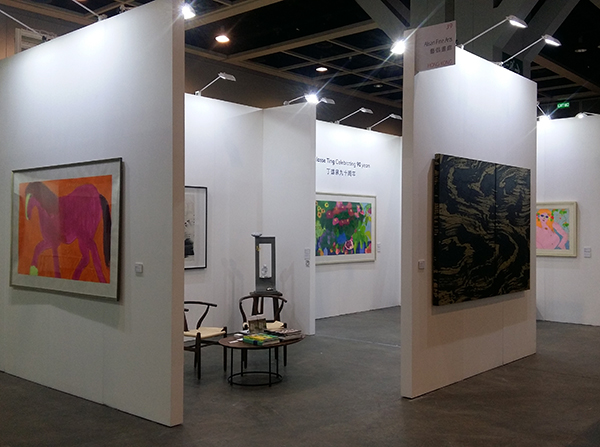 Ting WalasseLan ZhenghuiVerdier FabienneMok Yat-san
Introduction
Alisan Fine Arts is proud to be participating in Ink Asia for the third time since its inception. This year, our finely curated exhibition features international artists, Walasse Ting, Fabienne Verdier, and Lan Zhenghu. The artistic direction of these three individuals was influenced by their experiences abroad, giving each a unique perspective on the dynamics between Eastern and Western art. Over the years, they have tested and explored the realm between Chinese and Western sensibilities, blending the cultural differences between the two. Each of these artists finds creative expression for their unique concepts through the subtle, yet vibrant medium of ink. In commemoration of Walasse Ting's 90th anniversary, Alisan Fine Arts will dedicate half of its booth to showcase a selection of his most representative masterpieces, including rarely-exhibited Western nudes on Western paper, exotic beauties, and floral works on rice paper - all expressing Walasse Ting’s resplendent testimony to love, life and beauty. In addition to these three overseas artists, we will also showcase Hong Kong artist Mok Yat-San's sculptural Chinese ink scroll.

Known for his fluorescent hedonistic ladies, Walasse Ting's (1928-2010) artistic approach blends Eastern material with Western colours and composition. Alisan has held over ten solo exhibitions for Ting since 1986, including "Walasse Ting" at the Shanghai Art Museum in 1996. We are excited to share a selection rarely exhibited works from the artist's estate.

The well-known French abstract artist Fabienne Verdier synthesizes traditional calligraphy with a Western style of Abstraction to create bold, gestural works, imbued with the forces of motion and nature. AFA has been working with Fabienne since 2014 and held her solo exhibition The Ink Discipline - A series of rare original prints by Fabienne Verdier as part of Le French May program in 2014. We also included her prints in several group shows, including Art Basel Hong Kong (2014), Ink Asia (2015) and When Less is More (2018).

Lan Zhenghui's large-scale, often monumental abstract ink paintings, occupy an aesthetic confluence between traditional Chinese ink painting and Western abstract expressionism. Preferring to focus on the relationship of integration and macroscopic processes over detail and realism, he allows the ink to flow freely and paints with bold, kinetic strokes.