Born in San Mateo, California in 1923, Sam Francis was a true international artist. During his lifetime he had studios in Paris, Bern, New York, Tokyo and California, and has had numerous exhibitions in major museums around the world. His work holds references to abstract expressionism, Chinese, Japanese and Jungarian philosophy, French impressionism, and his own Bay Area roots.

Since his early years he had an interest in poetry and started making drawings of nudes while still in high school, but chose to study medicine when he attended the University of California in Berkeley. Two years later, he joined the U.S. Army Air Force and was severely injured during a test flight and confined to the hospital in a body cast. This event changed his life forever, not only because he developed spinal tuberculosis but also because as therapy, he started to paint. Unable to move, he spent hours examining light and its reflection on the ceiling and its changes during the different times of the day. This began his lifelong interest in the exploration of light and space.

In 1946, even before Francis left the hospital, one of his early watercolours was selected for the 66th Annual Exhibition of the San Francisco Art Association. After being released, Francis returned to Berkeley and switched to studying art. He received his BFA and MFA in 1949 and 1950 respectively.

Perhaps looking for new horizons or influenced by his maternal family’s French connection (Henri Toulouse-Lautrec was among his ancestors), Francis decided to move to Paris in 1950 soon after graduation. Upon his arrival in France, like other Americans, he went to study at Fernand Leger’s Academy and was able to establish relationships with important artists and art critiques. That same year, Francis’ work was also on display at the Salon de Mai.

By the mid 1950s Francis was well on the road to success. Mme Matisse and Alberto Giacometti each had acquired his paintings. In a review of his second solo show in France, Time magazine called him “the hottest American painter in Paris”.1 He also began showing his work in Bern, Rome and Stockholm. James John Sweeney, the then Director of the Solomon R. Guggenheim Museum visited Francis in his studio in Paris in 1952. A few years later, in 1955, Alfred H. Barr Jr, of the Museum of Modern Art purchased one of Francis’ works which became the first one to enter a public collection. During the same year his paintings were included in the exhibition Art in the 20th Century at the San Francisco Museum of Modern Art and the Pittsburgh International at the Carnegie Institute. A year later, his large canvases were also included in the exhibition Twelve Americans at the Museum of Modern Art. Back in Europe, he was also commissioned to create a large mural for the Basel Kunsthalle.

In 1957, Francis decided to take his first trip around the world, stops included New York, Mexico, and Japan as well as Hong Kong, Thailand and India. His stopover in Asia familiarized him with non-Western philosophies such as Taoism and the Japanese concept of “ma,” the dynamic between form and non-form.

In the 1960s, blue increasingly became the dominant colour in Francis’s work. Of note is the series Blue Balls, consisting of varying sizes of organic shapes floating on the paper, perhaps referencing the development of space travel during that period. “They are like clouds against the sky, except that the blue-white relationship has been reversed”.2 During this time, he also began to develop a life-long interest in prints. He notes that his prints are not intended to be reproductions of his paintings and instead are works in their own right. He eventually opened his own print workshop in 1970 in Santa Monica. It was also this dedication to prints that led him to work together with Ting to produce 1¢ Life in 1964 (see John Seed article “DEAR Big SAM," Celebrating a Friendship: Walasse Ting & Sam Francis e-catalague, Alisan Fine Arts, 2021, p. 16).

Another shift in Francis’ work is seen again in 1963 when white becomes the focal point and dominates the work by taking over the center of the paper. The floating organic shapes are now pushed to the side as in Bright Ring Drawing . Two years later, the organic forms are now taken over by more geometric, angular shapes as in Blue Cut Sail. The negative space now looks like a mirror luring the viewer in while the colour in opposition frames the paintings. To Francis white was a colour just as important and full as any other primary colour.

In the 1970s, Francis' style evolved from the depiction of bright and emphatic Tibetan mandalas as in Untitled 3 to his late 1970s exploration of the more structured grids with colourful verticals and horizontals interwoven like a closely-knit fabric, as in Untitled 4 and 5.

1980 proved a particularly busy year for Francis; he had a one man show at the LA County Museum of Art; received a commission to paint a mural for the San Francisco International Airport as well as a large five panel painting for the San Francisco Museum of Modern Art, and he was also elected to the Board of Trustees of the Museum of Contemporary Art, Los Angeles. Several years later, in recognition for his contribution to the arts he is named Commandeur de l’Ordre des Arts et des Lettres in 1983 by the French Minister of Culture, Jack Lang.

Francis passed away in 1994 from cancer. In addition to the hundreds of exhibitions held around the world in important galleries, museums, and biennals, three major retrospectives were also held during his lifetime. The first one in 1967 organized by James Johnson Sweeney at the Museum of Fine Arts, Houston which travelled to the University Art Museum, Berkley. Then in 1972, a major travelling retrospective opened at the Albright-Knox Art Gallery, Buffalo and then travelled to Corcoran Gallery of Art, Washington DC; Whitney Museum of American Art, New York; Dallas Museum of Fine Arts and the Oakland Museum, California. The last one was in 1993 at the Kunst und Ausstellungshalle in Bonn, Germany. Ting Travelled there to celebrate this momentus occasion with his life long friend. Sadly this would be the last time they see each other as Francis passed away the following year. 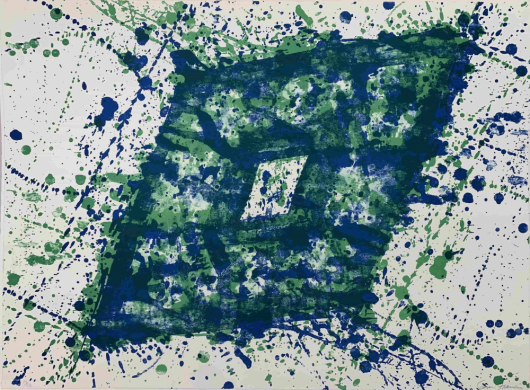