Born in Shanghai in 1921, John Way was a Chinese-American artist, who became known for his bold paintings that combine layers of colours inspired by Chinese calligraphy and Abstract Expressionist painting. Way began studying calligraphy at the age of ten under the famous artist Li Zhongqian, the nephew and student of Li Ruiqing. At sixteen he had his first calligraphy exhibition, which garnered him praise for his works. In 1949 he and his family moved to Hong Kong where he joined the Hong Kong Art Club and for the first time was exposed to and able to study Western art. His paintings of this period are typically figurative in the subject matter. He moved to Boston in 1956 and studied engineering at the Massachusetts Institute of Technology. During 1960s, Way began to feel that abstraction best enabled him to express himself as an artist. Notably, his oil paintings became suffused with colour in such a way that space breathes and gives the impression of great depth. He “wrote” over these layers with a thick brush of darker paint, reminiscent of the free-flowing movement of the calligrapher’s brush. He went to Paris for further studies in 1975 and published a series of four Chinese calligraphy books in 1981, 1986, 1991 & 1999. He passed away in 2012.

Alisan Fine Arts has organised three solo exhibitions for him in 2001, 2003 and 2006, and exhibited his work as part of Syncretic Visions: The First Generation of Chinese Diaspora Artists in America, a curated selection of Chinese-American diaspora artists shown at Fine Art Asia in 2015. His works have been exhibited in over forty solo and group shows around the world, including in the United States, France, Switzerland, Germany, China, Taiwan, and Hong Kong. He was chosen in 1965 to exhibit alongside Hartung, Pollock, and Warhol in an exhibition at the Institute of Contemporary Art in Boston titled Painter without a Brush. In 1997, he was listed in “Who’s Who in International Art” and in 1998 he was Appointed Art Professor, at the Accademia Internazionale Greci Marino, in Italy. His work was selected in Switzerland to be part of a postage stamp series in 2000, 2002 and 2004. A major catalogue was published for his retrospective in 2001 at Shanghai Art Museum. In 2006, an exhibition of his calligraphy and oil paintings were on show at the Honolulu Academy of Arts in Hawaii, and a 90-Year Retrospective in Beijing 2010. His works have been collected by the Fine Arts Museum of San Francisco, United States; Pacific Asia Museum, Pasadena, United States; Hong Kong Museum of Art. 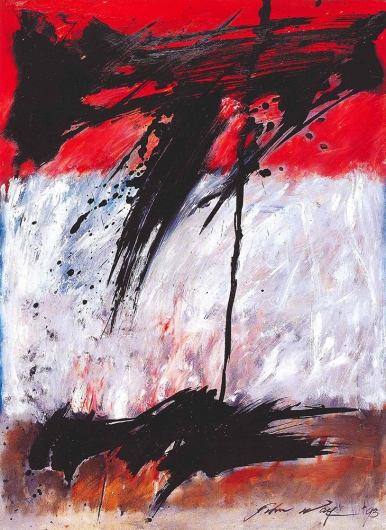 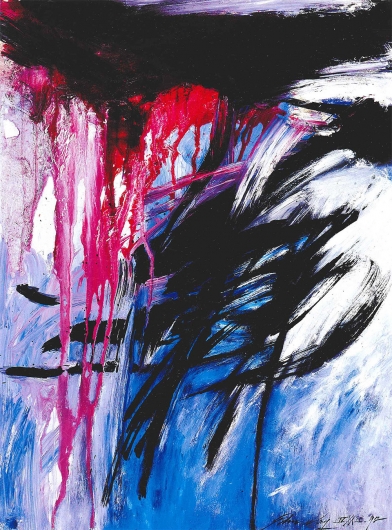 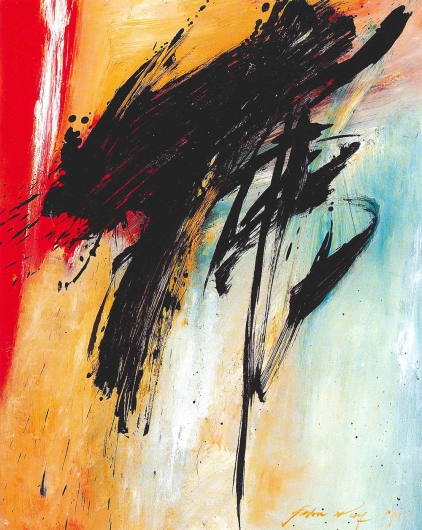 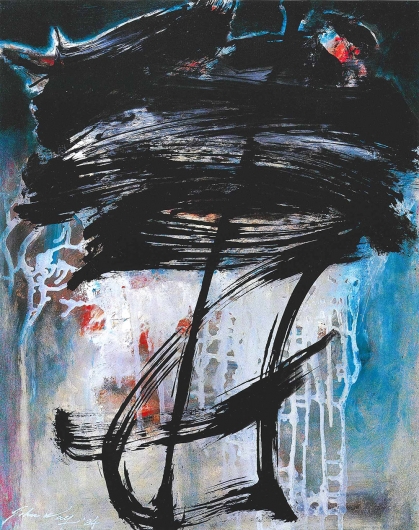 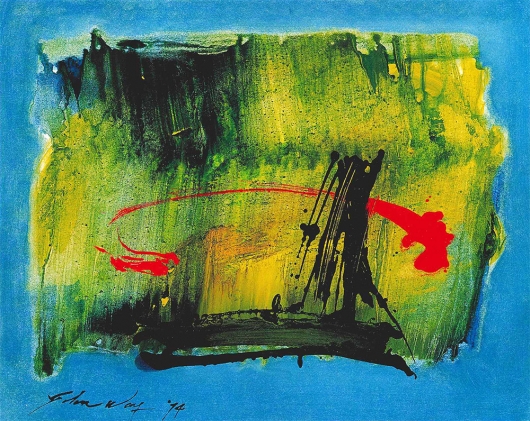