For Director Alice King, Zao Wou-ki belongs to what she identifies as the “Lost Generation”, which includes the generation of Chinese artists who went abroad in the 1940s to study and often permanently settled in their adopted countries. Many of these artists struggled to make a name for themselves in the West and, as suggested by a letter King wrote to Zao in 1982, were fairly unheard of in the East. Born in 1920 in Beijing, Zao began living in Paris in 1948. A student of Lin Fengmian, a pioneer of modern Chinese painting, Zao studied at the Hangzhou National College of Art before he left for Paris. While drawing from his Chinese roots, he became an exponent of Lyrical Abstraction in oil painting after becoming inspired by Western artists, in particular, Paul Klee. He passed away in 2013.

The gallery began showing Zao’s works in 1983, before he was well-known in Asia, as part of a group exhibition Contemporary European Artists, and since then has held four solo exhibitions for Zao. The gallery held his very first selling exhibition in Hong Kong in 1993, in conjunction with the first Le French May Festival, featuring works in Chinese ink on paper and oil on canvas. This was followed by a solo exhibition in 1996. Although oil painting was to become Zao Wou-ki’s primary medium and the source of his worldwide renown, he also experimented in printmaking, Chinese ink painting and watercolours. In 2003, the gallery showcased a series of Zao’s rare early oil paintings and watercolours, the same year an important retrospective was held for him at the Galerie Nationale du Jeu de Paume in Paris. Then in 2009, Alisan organised Celebrating Zao Wou-ki, which included a collection of Zao’s oil paintings, watercolours, lithographs, etchings, and ink works, executed between 1949 and 1994, providing an overview of Zao Wou-ki’s artistic development from the early poetic figurative work to the later meditative abstract compositions.

Important exhibitions of Zao’s works have been held at the Grand Palais in 1981, Palace Museum Beijing in 1983, with retrospectives at Taipei Fine Arts Museum in 1993, Kaohsiung Museum of Fine Arts in 1995, Hong Kong Museum of Art in 1996, Galerie Nationale du Jeu de Paume, Paris between 2003-04. His works have been widely collected by important museums, including the Museum of Modern Art, New York; the Asian Art Museum of San Francisco; Museum of Fine Arts, Boston; Tate, London; Musée d'Art Moderne de la Ville de Paris; National Osaka Art Museum; Hong Kong Museum of Art. In 1993 he was awarded the Commandeur de la Légion d'Honneur, and in 2006 he was made Grand Officier de l’Ordre de la Légion d’Honneur.

BIOGRAPHY
1921    Born in Beijing into the ancient T’chao family with a family tree dating back to the Sung dynasty. (T’chao became Zao when he moved to France.) Their ancestor was the Emperor’s brother, who was known as King Swallow and Nightingale. One of the family treasures was a painting by Mi Fei (1051-1107) whom Zao regards as one of the greatest Chinese painters because he had “his own way of looking at things and [was] a great calligrapher.”
1931    Zao showed a keen interest in literature and history at school and started to draw and paint.
1935    Zao was enrolled in the Fine Arts School of Hangzhou, remaining there for six years.
1941    After finishing his studies, Zao remained at the Arts School as a lecturer and held his first exhibition in Chungking. These pictures were strongly influenced by Matisse and Picasso, but it was Cezanne and Matisse who were, he says, closest to his temperament and from whom he developed his approach to painting.
1948    Zao moved to Paris with his wife, Lan-Lan. On the day of his arrival, he spent the afternoon in the Louvre.
1949    Zao was awarded first prize in a drawing competition.
1951    Zao visited Switzerland on the occasion of an exhibition of his engravings and there discovered the work of Paul Klee who was inspired by Chinese art. This event was to have a very important and lasting effect on Zao.
1953    Over the next two years an incredible change took place in the paintings of Zao Wou-ki. He later commented, “My painting became illegible. Still, life and flowers were no longer there. I was tending towards imaginary, indecipherable writing.”
1957    This year and part of 1958 Zao spent travelling. While in New York visiting his brother, Zao met the art dealer Samuel Kootz and signed a contract to exhibit with him. He also met several artists who were to become his close friends, including Guston, Baziotes, Franz Kline, and Hans Hoffman. He was attracted to the freshness and spontaneity of American painting and the New York School.
1962    Zao was commissioned to illustrate La Tentation de l’Occident by the French Minister of Culture, Andre Malraux, who two years later would help him to get his French citizenship. Zao continued to work on engravings in 1965, 1966, 1967, 1971, 1974 and 1975.
1964     Zao was granted French citizenship.
1965    A film was made on Zao Wou-ki by Jean-Michel Meurice; the two men became good friends.
1970    On the occasion of the Salzburg music festival, Zao Wou-ki led a seminar organised by the artist Oskar Kokoschka.
1971    Zao’s second wife May became very ill, and he stopped painting.
1972    May died in early March and later that month Zao left France to visit his mother in China, his mother that he had not seen since his departure in 1948. He started then his first ink works.
1973     At the end of the year Zao began to paint again.
1975     Zao had returned to using large formats for his work.
1977     Later in the year, Zao travelled to Rome with his wife Francoise Marquet and saw an exhibition of the works of Nicolas Poussin. Zao spent many hours sitting in front of the Poussin paintings.
1978     Zao met the Baron and Baroness Thyssen-Bornemisa during their visit to Paris. Later Zao went to Madrid for a show honouring Joan Miro, his long-time friend.
1981     Zao Wou-ki met Francoise Marquet, a young conservator, with whom it was love at first sight.
1982 In October, Zao visited China for the opening of the Fragrant Hills Hotel designed by his good friend I.M.Pei. Zao created two very large works done in Chinese ink for the opening.
1983    During the trip to Taiwan, Zao visited with the master Zhang Daqian.
1984    The French Ministry of Culture awarded Zao the Legion d’honneur.
1985    Zao Wou-ki went to China (Hangzhou) where he taught classes on painting, and modern art, and his wife, Francoise Marquet, museology.
1993    He is promoted by the President of the French Republic to Commandeur de la Legion d’honneur.
1994    He travelled to Japan to be awarded the Imperial Prize (fine arts).
2003    Zao Wou-ki is received at the French Académie des Beaux Arts November 26
2006    Zao Wou-ki has been made a ‘Grand Officier de l’Ordre de la Légion d’Honneur’, and decorated by the French President Jacques Chirac on 3rd November 2006 at the Palais de l’Elysée
2013   assed away in Switzerland 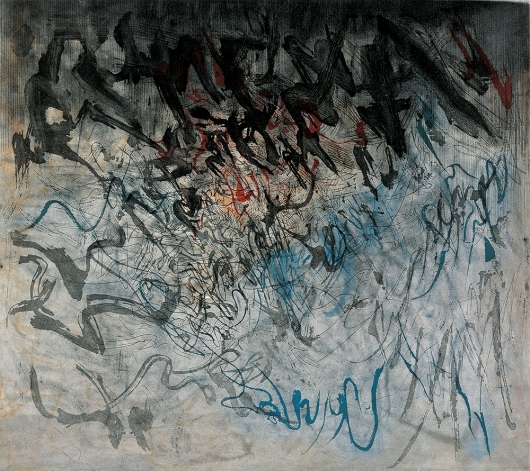 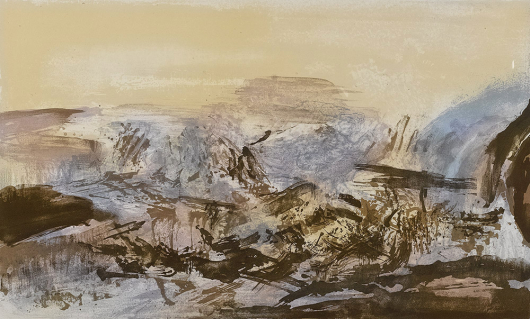