A founding member of the Political Pop movement of the 1990s, Li Shan is internationally known for his iconic portraits of a youthful exuberant Mao Zedong set against colourful backdrop, and usually accompanied by a lotus flower. Artists of this genre experienced China’s dramatic transformations and social upheaval during the 1980s and 1990s, recycling images of party propaganda from their youth. Born in 1942 Heilongjiang Province, Li grew up during the rise of the Chinese Communist Party. After studying at Heilongjiang University in 1963 he pursued further studies at the Shanghai Theatre Academy in the Department of Theatre Design in 1964-68 specialising in oil painting. Significantly, during the late 1970s, he became actively involved in the Shanghai contemporary art scene and participated in several exhibitions featuring the new generation of Chinese contemporary artists –what would become known as the 85 New Wave Movement artists. In 1993 his works were featured at the 45th Venice Biennale.

Alisan Fine Arts began representing Li Shan in the 1980s and showcased his work in three important exhibitions at the Hong Kong Arts Centre. First, as part of the landmark group exhibition A State of Transition: Contemporary Painting from Shanghai in 1987. Then in 1994 the gallery organised a solo exhibition of Li’s early pre-political pop artworks, and in 1997 included his paintings in the group show Chinese Abstraction and Beyond. 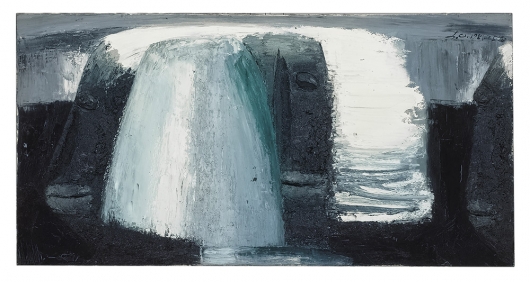