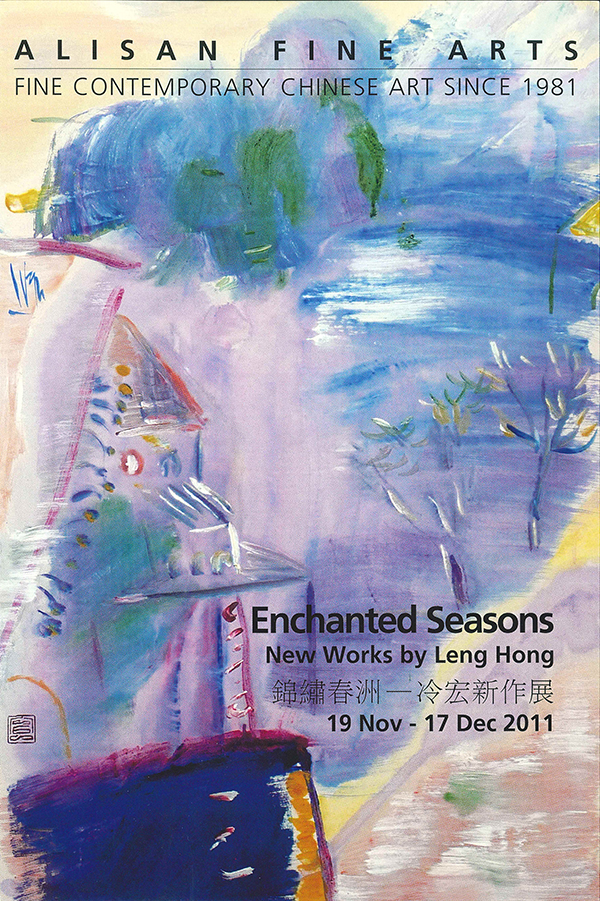 Leng Hong
Introduction
In celebrating our 30th anniversary, Alisan Fine Arts is pleased to present “Enchanted Seasons” a solo exhibition by Shanghai artist Leng Hong. Around 20 of his most recent abstract landscapes from his “Blue Mountains, Green Water” series will be on display. This series revolves around the four seasons: spring, summer, fall, winter, with an emphasis on spring.

Leng Hong is one of the most important overseas Chinese artists since China’s economic reform in 1978. He is 56-years-old and currently lives in Canada. His landscape paintings are refreshing modern and full of beauty. In 1987, Alisan Fine Arts organized one of the first group exhibitions of mainland Chinese artists at the Hong Kong Arts Centre. Titled “A State of Transition, Contemporary Painting from Shanghai,” Leng was one of the selected 14 artists included in the show. After 24 years, we are now proud to present his new works in a solo exhibition for the forth time at the gallery.

Biography
Leng Hong graduated from the Department of Fine Arts of the Shanghai Theatre Academy in 1978. He was a Researcher and Professor at Shanghai Chinese Painting Academy from 1978 to 1986. After that, he departed to Bordeaux, France in 1986 and then moved to Canada in 1992. Since 2006 he has been a part-time professor at Fine Art College of Shanghai University. In 2013 Leng is planning to have a solo exhibition in the Chateau d’Issan in South West France.
Leng has received numerous prizes in both China and France including the “Creative Works Award”, China in 1985; “First Grand Prize of the City of Bordeaux” and Grand Prize “Noveau Talent” of the Federation National de la Culture Française in 1987; Prize “Couleurs d’Aujourd’hui” 1988 and Prize “Symposium d’Arts Plastiques” 1992. His works have been featured in 13 different television programmes from 1988 to 2010, such as FR3, France; CTV, Canada; NHK Entertainment News, Japan; HKATV, Hong Kong; and SMG, China.

Selected Exhibitions, Auctions and Museums Collections
He has had more than 28 solo exhibitions and 37 group exhibitions in museums, galleries and international art fairs around the world since 1983, such as US, Canada, Mexico, France, Belgium, Germany, Austria, UK, Japan, Singapore, China. In addition, his paintings have appeared in 11 different auction sales, such as Sotheby’s Taiwan 1994; Hanhai Auction, Beijing 2005; Macao Chongyuan International Arts Auction 2006; Drouot Estimations, Paris 2008; Poly Auction, Beijing 2008; Van Ham Kunstauktionen, Germany 2009. His works are collected by museums, galleries and private collectors around the world, such as China, Singapore, Japan, France, Germany, Canada, US. This will be the forth solo exhibition Alisan will be holding for Leng. The others were in 1988, 1994 and 1996.