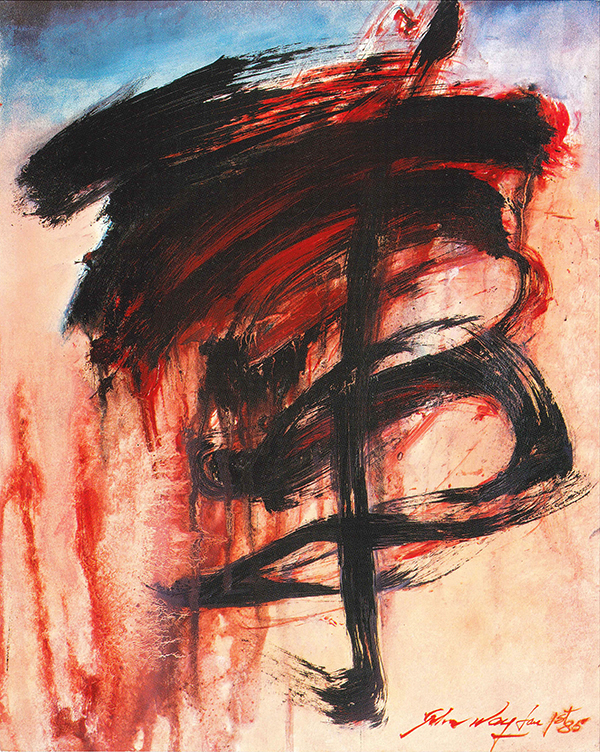 Introduction
Alisan Fine Arts is pleased to present “Painterly Calligraphy, John Way,” from 16 Mar to 8 April 2006, featuring around 15 paintings by John Way, a Shanghai-born (1921) San Francisco-based artist, dated from 1974 to 1998. His exhibition of calligraphy and oil painting will be at the Honolulu Academy of Arts, Hawaii, USA from May 4 to July 2.

John Way’s painting language is benefited from traditional Chinese cursive calligraphy and Western art movement of abstract expressionism. For the past sixty years he has attempted to bring these two seemingly diverse art forms into harmony through his oil painting. After retiring from engineering, it was in 1992 at age 70 that he became a full time professional painter. His work was selected for a Swiss postage stamp series celebrating the new millennium in 2000, 2002 and 2004. A major catalogue has been published for the retrospective exhibition at the Shanghai Art Museum in 2001.
Way’s early training began with calligraphy, and this formed the basis from which he has perfected his own unique abstraction, a personal blend of East and West formed from a lifetime of experimentation and hard work. John Way’s oil paintings are suffused with colour in such a way that the space breathes and gives the impression of great depth. He achieves this effect by using layer upon layer of paint. Sometimes the layers are quite thin, and drip down the canvas revealing other shades of colour underneath. Sometimes a layer appears to have been removed with the side of a palette knife. At other times he “writes” over these layers with a thick brush of darker paint, reminiscent of the free-flowing movement of the calligrapher’s brush and, indeed, as in calligraphy, traces of “flying white” can often be seen. The overall impression is a lively interplay of colour and movement, an abstract visualisation of the music heard in a dramatic symphony.
Robert Flynn Johnson, Curator at the Fine Arts Museums of San Francisco, chose several of Way’s paintings for the Museum collection, and has praised his work:
For nearly seventy years the artist John Way has devoted himself to an art that is at once personal and extroverted. It is an art born and nurtured in China, developed in Hong Kong and matured in the United States. It is now finding its full flowing in recent years in a personal and highly successful merging of his various artistic selves into a unified whole.
Way was born in Shanghai into a cultured family and began studying calligraphy by the age of ten under the famous master Li Zhongqian, the nephew and student of Li Ruiqing. His first calligraphy exhibition, when he was only 16, earned him extravagant praise. In 1949 he and his family moved to Hong Kong where he joined the Hong Kong Art Club and for the first time was exposed to and studied Western art. His paintings of this period are figurative. After his move to Boston in 1956, he studied engineering at MIT and learned the principles of design, enabling him to better understand abstract art. During the 1960’s, just as Warhol and others were moving away from abstraction, Way began to feel that the abstract style best enabled him to express himself as an artist because of his strong grounding in calligraphy. He was chosen in 1965 to exhibit along side De Kooning, Pollock and Kline in the Painter without a Brush exhibition in Boston.

For the next 30 years he was a professional engineer by day and a painter and calligrapher in his spare time. He believes an artist should “live for art” rather than earn a living by selling art. He said recently, “I have found my unique approach merging the best of East and West through a blending of Chinese calligraphy and Western abstraction.”