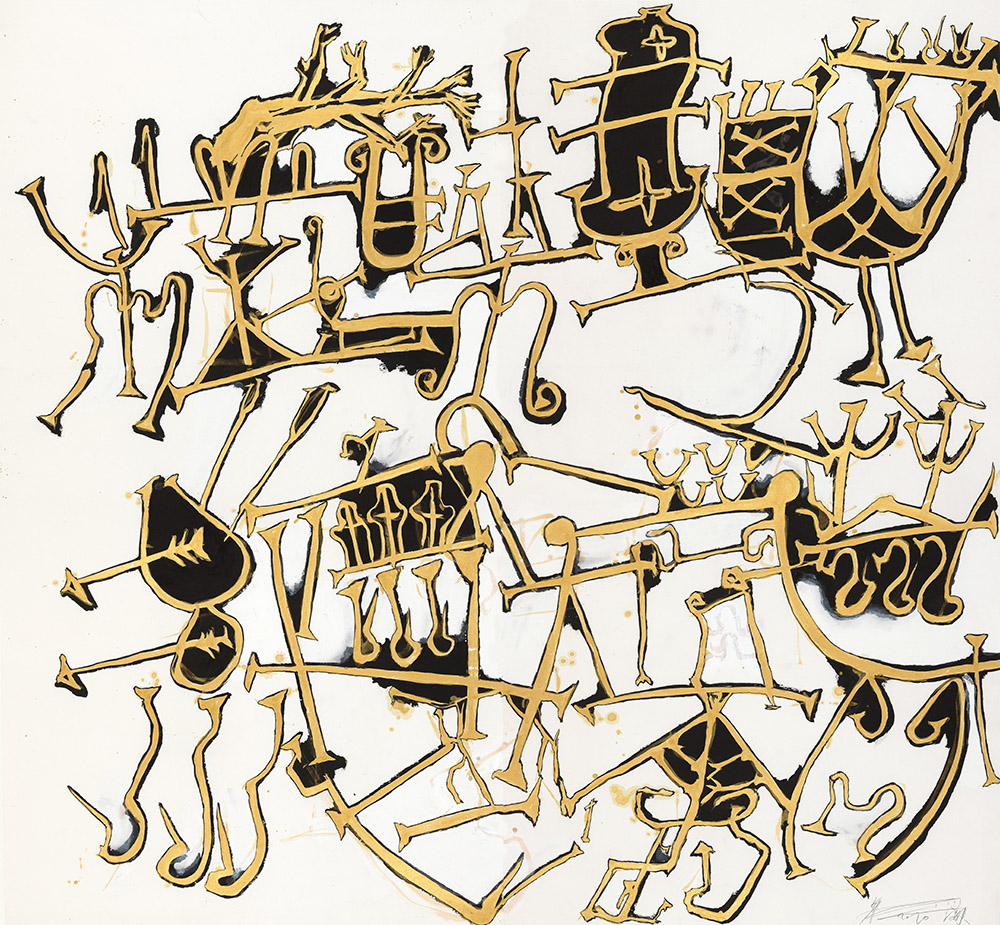 Alisan Fine Arts is pleased to announce the opening of our third solo exhibition Silent Mountains, Meandering Rivers by internationally renowned contemporary artist Wei Ligang. Showcasing fifteen of his recent works, the selection focuses on his iconic calligraphy paintings which continue to explore abstraction through the use of his unconventional Chinese calligraphic script. Together with his ever-popular flower and peacock series, the body of work offers a contemporary take on the classical literati study of poems, flowers and birds. Also included in this exhibition are Wei’s latest abstract paintings based on “Universalism”, a theory that purports truth is beyond secular emotion and religion, highlighting the fact that his paintings while rooted in Chinese tradition have universal appeal and are beyond cultural boundaries. When talking about this exhibition, Wei says, “It is my hope that the refreshing art forms of flowers, birds, and poems about winding rivers meandering in the mountains can provide a momentary refuge for those living in the hustle and bustle of Hong Kong.”

As early as 2002, Wei had already been recognized as an important propagator of contemporary Chinese calligraphy with the success of the group exhibition Brushes with Surprise: The Art of Calligraphy in Modern China held at the British Museum. In the catalogue published in conjunction with the exhibition, Professor Gordon S. Barrass, the curator of the exhibition wrote: “...one way in which Wei Ligang is unique is that he comes from a scientific background. His familiarity with some of the arcane concepts of mathematics has no doubt informed his rigorous efforts to turn Avant- Garde calligraphy into a purely abstract art.” (P. 244)

Wei is best known for creating abstract art that merges traditional and modern calligraphy. With the use of bold colours, including gold, and multiple layers of ink as embellishments, his paintings evoke a contemporary feel as seen in the painting Cursive Calligraphy in Gold and Ink I, II & III. (p.7, 8, 12) Similar works were featured last year in his major solo exhibition Universality at the Zhi Art Museum in Chengdu. Building on his calligraphy series of Cursive Calligraphy in Gold and Ink and Wei Squares, the cursive script and ancient seal characters reveal well-known ancient poems, but more importantly create beautiful meandering abstract images that transport one into another world.

Like the literati before him, Wei is not only well-versed in ancient text and calligraphy, but he is also fascinated with the study of Chinese culture, in particular “Yi Pin”, an aesthetic practice developed by the literati painters in the Song Dynasty. Practitioners of this study choose to illustrate the spirit and soul of the object, rather than the physical appearance. This can be seen in his recent popular flower paintings where he not only depicts a blooming bouquet of flowers, but also captures the energy hidden within the bloom. Unlike his previous flower series, this recent work White Stone (p.15) juxtaposes flowers with scholar rocks, giving us a sense of time and space.

The remaining paintings in this exhibition are abstract works based on the concept of Universalism. While rooted in Chinese culture, these paintings transcend cultural boundaries and can be viewed as geometric abstract works. For example, Snowy Cushions (p.26) is composed of white circles of similar sizes lined up in several columns, each circle representing a Chinese character. However, to a viewer who does not have the knowledge of Chinese calligraphy, the work can also be seen simply as an abstract painting with numerous greyish white circular forms. Influenced by his mathematical past, Jade Island (p.20) which depicts three and four -sided lavishly coloured shapes, and Beautiful Land (p.24) inspired by dried and cracking soil or a turtle’s shell are abstract paintings filled with well-designed geometric arrangements that have replaced any form of calligraphic script. These strong and bold works belong to his well-liked Peacock series.

Bringing the idea of “Universalism” one step further, two new works, Treasure Ware (p.21), which was inspired by deserted oil tanks found in Beijing’s rural villages, and Overlapping (p.23), which bears a resemblance to the colourful shell bracelets popular in Qingdao, both depict circular forms strung together, turned on their side, sliced open and stacked one on top of the other in a 3-D plane. Viewing the forms from a bird’s eye view, the shapes now become compressed, thus offering a new perspective of these circular “calligraphic” forms. Again, without referencing Chinese culture one can view these as beautiful richly coloured abstract paintings.