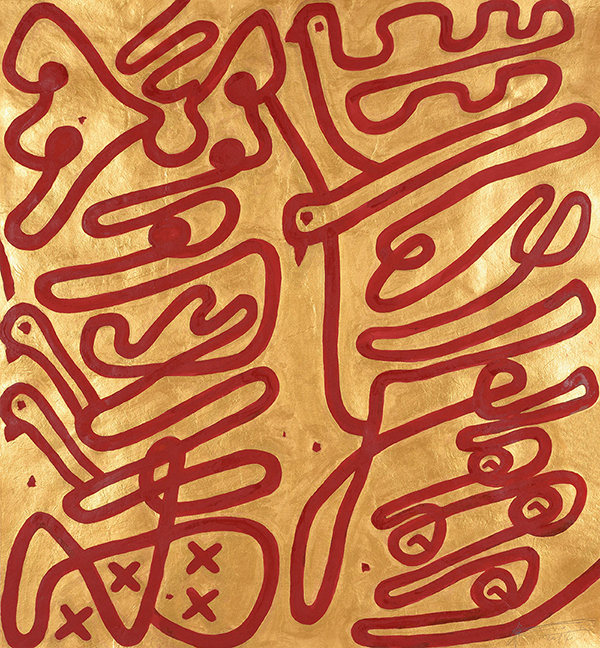 Wei Ligang Catalogue
Introduction
Wei Ligang is considered one of the leaders in the modern Chinese calligraphy movement. Recognized for his contemporary abstract ink paintings that are rooted in ancient calligraphy, he has been able to transcend the old to create works that are unique in form and style. One of Wei’s most significant calligraphic series either in black calligraphy, red calligraphy or gold calligraphy are paired with opposing black or gold backgrounds. He uses Chinese ink and acrylic colour, adding cursive to the ancient seal script so that the strokes appear interwoven and entwined. The content of his calligraphy are based on classical Chinese poems, reflecting a poetic sense of the phrase in a powerful and modern way.

This exhibition features Wei Ligang’s most recent paintings that are created specially for this occasion. His iconic golden calligraphy, as well as Plum Blossoms series and Peacock series will be on display. 28 works of multi-coloured calligraphic paintings make up Wei Ligang’s gorgeous Ink Garden, depicting different kinds of prosperous Chinese subjects, auspicious birds and foliage, jade screens, and literati music.

Wei was born in 1964 in Datong and currently lives in Beijing. He learned Chinese opera and painting from his father when he was a child, and was a student of several famous Tianjin calligraphers. Upon graduation from Nankai University, Tianjian, he taught mathematics in Taiyuan City. In 1985, he began to study Fushan (1607-1684 Chinese artist in late Ming and early Qing Dynasty) style cursive calligraphy while exploring a new direction in his art. In 1995 he settled in Beijing as a guest lecturer at Qinghua University, Beijing. In 1999, Pu Leiping and him curated an important exhibition “Chinese Modern Calligraphy” in Chengdu.

In 2002, his works were included in the pioneering exhibition by British Museum “Brushes with Surprise: The Art of Calligraphy in Modern China”, directed by Prof Gordon Barrass. In the museum catalogue, Prof Barrass wrote: “…one way is which Wei Ligang is unique is that he comes from a scientific background. His familiarity with some of the arcane concepts of mathematics has no doubt informed his rigorous efforts to turn Avant-Garde calligraphy into a purely abstract art.” (The Art of Calligraphy in Modern China, British Museum, 2002) In 2005, Wei was awarded a fellowship grant from the Rockefeller Foundation’s Asian Cultural Council to study in the United States. Not only was he able to broaden his horizon by visiting numerous museums in the West but also he was able to work with other professionals in the field, such as well-known American Abstract artist, Brice Marden.

Alisan held a solo exhibition for Wei in 2006 and a group exhibition “Selected Asian Cultural Council Fellows: Then and Now” together with Wei Qingji and Zhang Jianjun at ACC Hong Kong in 2011. We also exhibited his works at FINE ART ASIA 2009, ART HK 2010 and Art Basel Hong Kong 2013.

After almost ten years since his last solo exhibition in Hong Kong, we are excited to be showing Wei’s latest works. This exhibition is also the second in a series of exhibitions that feature artists who use the ancient calligraphy text as the foundation of their paintings.