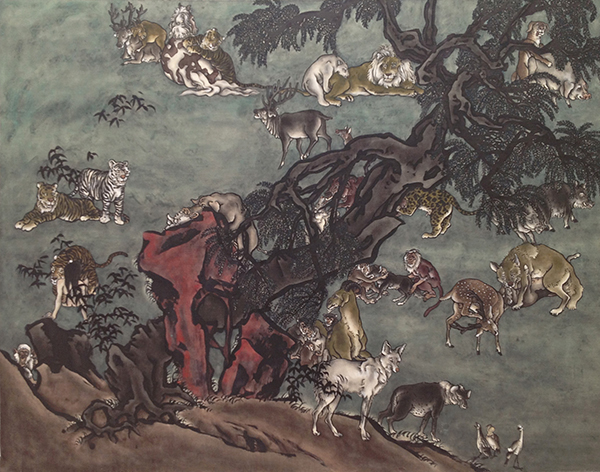 Yang Jiechang: This is still Bird and Flower Painting

Alisan Fine Arts is excited to present the first exhibition in our new space in Central, Yang Jiechang: This is still Bird and Flower Painting. Writing about the inspiration for the show, Yang says that “in the beginning, when I began to study painting, I had to copy works by Huang Quan of the Five Dynasties and by Zhao Ji of the Song Dynasty for a long time. Now sixty years old and accustomed to the East and the West, the sweet taste of this first nourishment is still unforgettable. I have no words for it. For this exhibition I still paint bird and flower paintings. Our times resemble so much the times of Song Emperor Huizong. Art is some kind of medicine, revitalizing and clearing the mind.”

On display are total 30 works by Yang Jiechang, including meticulous colour paintings, oil paintings, drawings and porcelain flowers. The subject, no matter of flower or animal, stands for the human character and the inner mood. Highlights of Yang’s artworks will also be exhibited at our booth at Art Basel Hong Kong, 3D03. Yang Jiechang will be flying here from Paris for the opening reception on 20 March (Monday) 6-8pm and will give a talk starting at 6:30pm. He will also be in attendance at our Art Basel booth 3D03 on 21 & 22 for the private preview and vernissage.

For many artists the founding of the People’s Republic of China, and the subsequent purges signaled the end of inquiry into and exchange with the West. However, Yang Jiechang was fortunate enough to spend his time learning classical Chinese from reading prohibited materials as a member of the Red Guard. Born in 1956 in Foshan, Guangdong, he began studying Chinese ink painting and calligraphy at the People’s Art Institute in Foshan. During the late 1970s and early 1980s, he attended the Guangzhou Art Academy where he was exposed to Western art through a lecture series given by Joan Lebold Cohen (the noted Chinese art historian and curator) and Taiwanese art magazines. In 1989, he was chosen to participate in Magiciens de la Terra, at the Centre Georges Pompidou, Paris, and his series “Hundred Layers of Ink” caused quite the stir at the exhibition and in the international art scene. The paintings from this series are the result of focused repetition, and Yang applied ink to the same piece each day, every day until the paper became completely saturated. Since then, Yang has lived and worked in Paris, producing an oeuvre that varies in style, medium and inspirations. He has had numerous major exhibitions across China, Europe and the North America. As part of Le French May, Alice King guest curated his solo exhibition at the Museum and Art Gallery, the University of Hong Kong in 2001, and again in 2015 as part of Le French May, Alisan Fine Arts held an exhibition at the Hong Kong Central Library for the artist, documenting his artistic career.