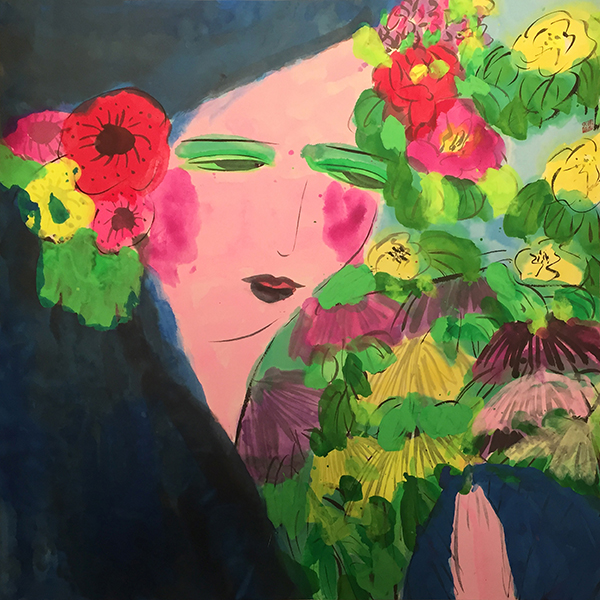 Ting Walasse
Introduction
To be officiated by Mr Eric Berti, Consul General of France in Hong Kong and Macau
In the presence of Mia Ting and Jesse Ting, Walasse Ting’s children

Alisan Fine Arts is proud to present a solo exhibition, Walasse Ting: Symphony of Colours, in our recently opened gallery space in Central. The exhibition marks the tenth solo exhibition Alisan Fine Arts has organized for the acclaimed diaspora artist since the 1980s. Working closely with Walasse Ting’s Estate this exhibition will showcase a curated selection of twenty-one never exhibited works of Ting’s highly acclaimed paintings of colourful ladies, flowers and birds. This exhibition follows on the heels of the first large scale exhibition at the Musée Cernuschi in France of the artist’s paintings and career.

Born in Wuxi, Jiangsu in 1928, internationally established artist, Walasse Ting is celebrated for his colourful and bright depictions of flora and sultry women. He briefly studied at the Shanghai Art Academy in 1940s, before leaving for Paris in the early 1950s at the age of nineteen. There he became associated with artists belonging to the avant-garde group CoBrA, including Karel Appel, Asger Jorn, and Pierre Alechinsky. In 1958, he travelled to New York, where he befriended American artist Sam Francis; here Ting became strongly influenced by Abstract Expressionism and Pop Art. In 1964 he wrote One Cent Life, edited by Sam Francis and published by E.W. Kornfeld, which involved collaborating with twenty-eight European and American Pop Art and Expressionist artists such as Andy Warhol, Roy Lichtenstein and Joan Mitchell whose original lithographs are among the sixty-two lithographs included in this book. In 1977, he won the Guggenheim Fellowship Award for his drawings. His paintings during this period are filled with bold dripping brushstrokes mixed with bright acrylic pigments, but by the late 1970s, he began experimenting with figures, developing the distinctive style that we are so familiar with today. His works painted in a rich palette of bright acrylics on rice paper, layered with powerful effervescent brushstrokes in Chinese ink and are a sheer testimony to love, life and beauty. He passed away in 2010.